Other variations on the theme of Bis

Still on the theme of BIS, although strictly speaking the jade objects that I show on this post cannot be called Bis. However as their forms are mostly flat, circular and with a hole in the center I have lumped them as such and hope that purists will not hammer me. 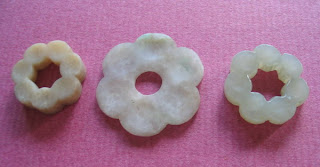 The 3 bis in the above pic have a border made up of a "continuous chain of scooped out surfaces," somewhat like a concave hollow of a small saucer. According to my jade seniors(shifus) this scooping out of jade surfaces is a hallmark of Ming period jade. 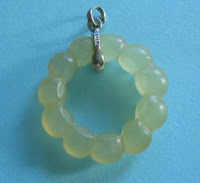 Left Pic above shows 2 bis with off-centre holes. The first piece is shaped and carved as a flower while the right item also has a border of scooped out surface plus a centre decoration of a flower. They make nice present day pendants.
Right Pic shows an evolution in style. Instead of the chain of scooped out surfaces of the earlier examples this bi features a continuos chain of pearls. In my jade seniors opinion this is reflective of Qing workmanship and design 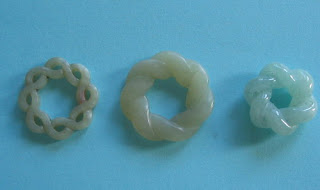 The 3 bis in the last picture show different kinds of twisted rope design. The first bi shows a thin intricately worked twisted rope, the middle is thick and flat while the one on the extreme right is fat and bulbous. Broadly speaking the first two are of Ming-Qing vintage and the last is a modern piece.
I love collecting these small jade objects and accessories and hope I have not been too off the mark in my descriptions and identification. Otherwise shifus out there may well give me a knock on the head !!
Posted by BAIYU