I am not trying to be cute with the header for this post. This ancient Huan
or Ring, to give it its more general name, is really full of grooves. Although Chinese normally describe this kind of pattern as "twisted rope design", some sources have described the spiral patterns as grooves, which I suppose is also correct. I purchased it more than 5 years ago from Shaanxi Province. According to my "research" the "twisted rope" carving style of this Ring ornament can be dated to to Spring and Autumn Period 771-475 BC.

The jade has been altered and is completely covered with a beige patina. It is no longer jade like. But still fascinating nevertheless. The patina is like a piece of crepe which engulfs the whole Ring whilst inside the grooves a regular pattern of ridges (?) or maybe should I say crinkles or wrinkles can be seen? O dear don't know whether this is the correct description or if I am making sense! I dont know all the correct terms and would never make a good curator. Sigh !But please look at the picture to have a clearer idea of what I am driving at. 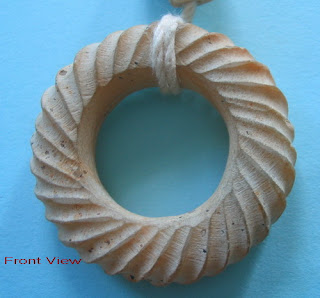 There is also iron rust marks on the one side of the Ring. 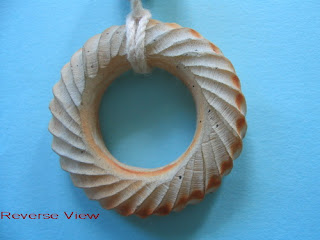 I speculate that the "ridges" visible in the grooves represent the tool marks on the original surface of the jade Ring. This Ring is also very well made with the grooves almost precision carved. The patina, the ancient toolmarks of grinding and the beautifully cut grooves all make this an unforgettable piece of artwork. Ahem, these are just my personal observations and ideas and and I have no hard facts to back up my story !

On a more serious note, there is a report about a paper * that delves into how groovy Ring ornaments, similar to mine, were created 2,500 years ago using compound machines. According to Harvard graduate Peter Lu "the spiral patterns on the small rings are Archimedes' spirals, which he believes are the oldest evidence of the use of compound machines." in China. He has even conducted an experiment to prove his controversial view.

O, the wonder of Chinese civilization, and their wonderful early inventions and works of art !

*http://www.newscientist.com/article.ns?id=dn5103(for those who wish read about the theory )
Posted by BAIYU