I have only just discovered that this is in fact a 3 faces bead (3 faces of Eve?) After reading Chinese Jades through the Wei Dynasty by Alfred Salmony p.107 and seeing a similar (but not IDENTICAL) piece, I realised that the central human face is sandwiched by 2 tiger heads at each end. Look at the bead vertically and you will see what I mean : 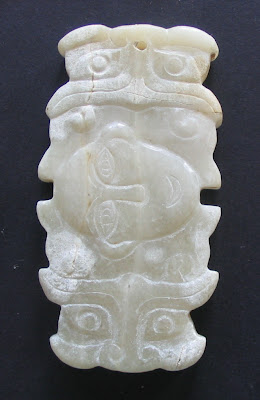 And how foolish of me not to detect it. I had not looked hard enough and had thought the tiger heads were some trellis border (blush !) 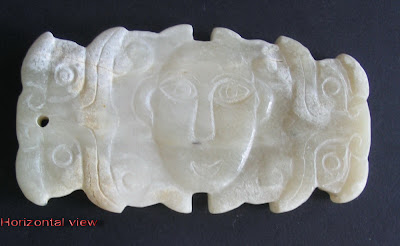 There are three differences between my face bead/pendant and the one shown in Salmony's book.

2. My pendant is flat with identical carvings on both sides while the book example has a plain concave back.

3. The carving on my pendant is less stylised and dramatic than the book example.

Bearing all these differences in mind can my face pendant claim relationship and similar vintage, ie middle Zhou around 1027-771 BC ? Well, vintage considerations aside, it is still a real neat bead/pendant that intrigues.

And so my inscrutable "tygers" were you shaped by some "immortal hand or eye"? :))