This is a pair of tiny jade jue ear ornaments I bought in China. Perhaps they are not even a matched pair as one is slightly larger than the other. 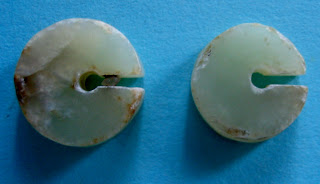 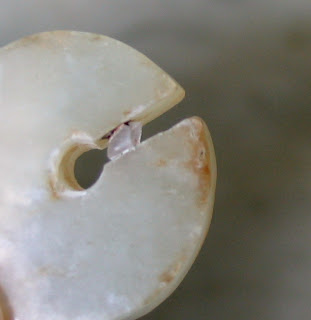 According to one net source, this maybe a ploy employed by fakers to trick buyers into believing the antiquity of the object. The source also described a sure proof way to test whether the quartz was placed there by an ingenious forger. To try out the test I got myself a sharp tooth pick and pried at the quartz with all my strength. As it did not give way, it might have been glued on very securely or else it is genuinely ancient. Still I guess if I use a sharp blade and work at it it just might give way. Meanwhile I am quite pleased with my ancient quartz stuck in my ancient jade jue.

What Id like to know is did nature place quartz and jade jue together and they bound  through the course of time or was the quartz used for polishing/grinding and got left behind ? Another thought that struck me, is that the placement of the quartz actually makes a convenient loop for attachment as earring. 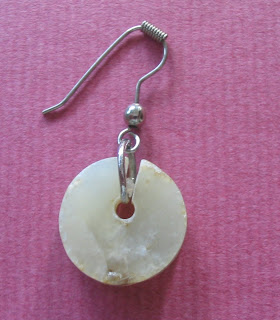 Because of its small size,  I do suspect that this pair may have been recarved from a larger piece of  broken ancient jade. However all the edges appear worn and indicate that there is some age to  them. 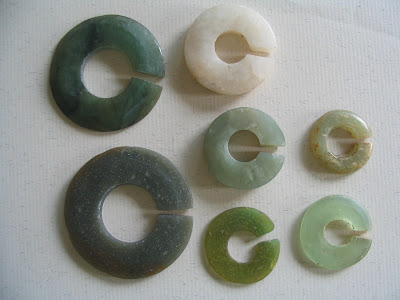 The two jues at the bottom right are made of glass and not jade. These Vietnamese jues have a later date than the Chinese ones.
Posted by BAIYU